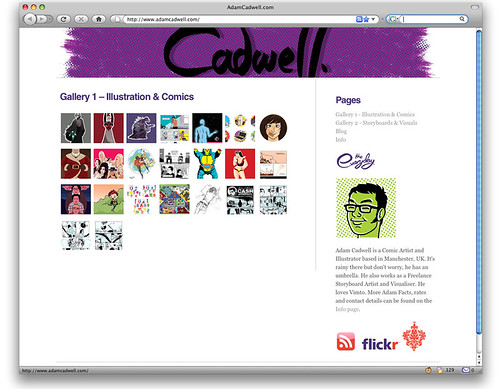 This week I have rebuilding my website from scratch using Wordpress, a theme called Cleanr and a Lightbox image viewer plugin. Say hello to brand new AdamCadwell.com, a much neater and spacious site which happily combines all my comic work with my commercial illustration and storyboard work. It's a one stop shop for all things Cadwell and it also hosts my new blog.

Which means, sadly, that I will no longer be posting on my dusty old LiveJournal. We've had some good times, and I've met the majority of my artist friends in the comic world through the ol' LJ, but after three years of blogging, the slow decline of posts on my Friends page and pretty much everyone using Google Reader (that's where I follow all my LJ friends now) it's time to move on. I'll be keeping my LJ account of course for commenting on other's blogs and everything will remain as an archive of my work and interests from June '06 to July '09.

So, to follow my continued blogging simply add http://www.adamcadwell.com/feed to your RSS reader of choice and I hope to see some familiar LJ names commenting on future posts.

Goodbye Livejournal! It's been nice knowin' ya ;) x

As a sidenote, I'm tidying up my web presence in general. Gone is my ugly MySpace and my forgotten ComicSpace, my Facebook is personal and I'm not on Twitter. I'll only be active on my own site, the Manchester Comix Collective and wonderful Flickr. In these days of customisable Web 2.0 I don't really see the need to be spread out all over the web, surely it's simpler to pull everything together into one or two places? 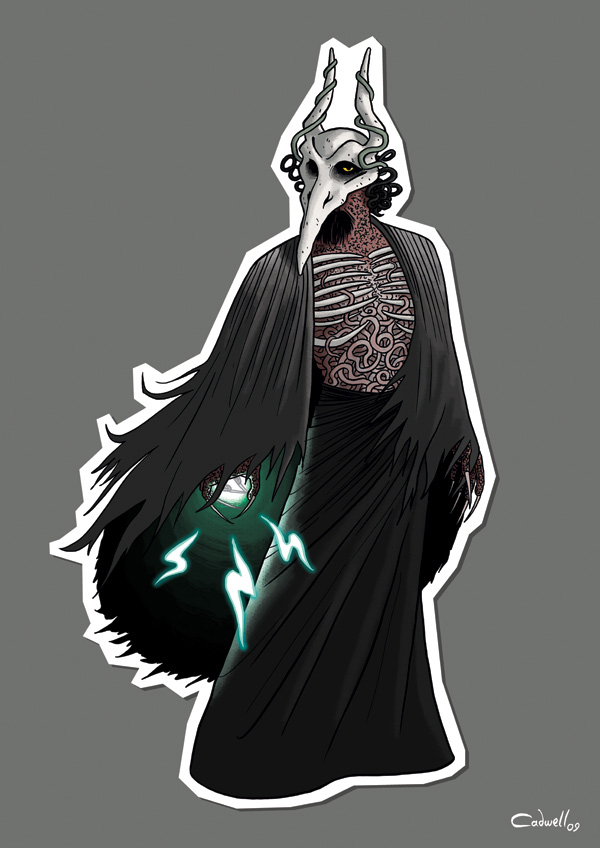 The third in my 'Childhood Villains' series, in which I draw character's that used to freak me out when I was little, is Charn from 'Through the Dragon's Eye'.

It's probably only people of around my age who grew up in Britain who will recognise this guy. Charn is the villain from the BBC Look & Read programme 'Through the Dragon's Eye' (1989), an epic fantasy on a low budget in which three school children enter a world without writing. Let me just reiterate that Charn was created to help teach children how to read. Teachers would record the show and play it in class, pausing it for us to join in the word puzzles, and every episode ended with a tense cliffhanger. I loved the show when I was 7 because it was so much more imaginative than any other education show for kids and as much fun as most cartoons. Who can forget Boris, Moris and Doris, the Keepers of the Veetacore?

Charn freaked me out of course and I'm sure I wasn't the only one. The skeletal bird wizard would stalk around zapping people with his lightning that would turn them into puddles of slime whilst creepily threatening the children, prodding them with his knife-like fingers. Watching it now he's evidently played by a camp thesp but there is still something truly horrible about that mask.

Also, looking at the characters I've chosen so far I think I might just be afraid of men in skirts.

If you think I may have exaggerated the horror of Charn's design (no children's character would have dusty guts spilling out of his ribcage, right?) then see him for yourself during the EPIC final battle between Charn and Gorwen, the good dragon of the title.

Next week: A surprise!

The Guardian site has a preview of Tim Burton's next film, Alice in Wonderland.
I always get excited by the news of a new Burton film, hoping that the next one might be as good as Ed Wood, Beetlejuice or Sleepy Hollow, but even if it's not this one looks like it might just surpass his past visual brilliance. It's shaping up to be what Return to Oz is to The Wizard of Oz, a much creepier tale of a grown up Alice returning to Wonderland. 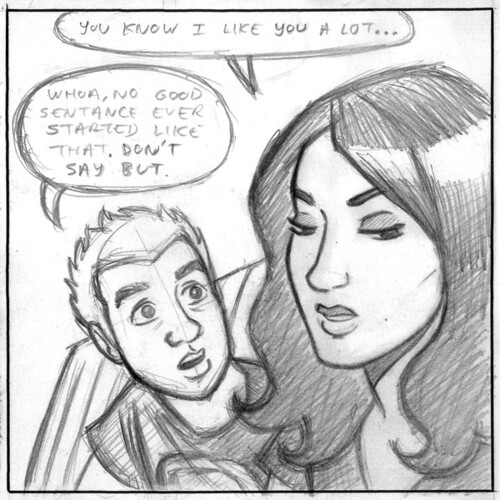 I'm half way through penciling my secret comic project - misleading working title "Blood Blokes" - and I just had to sneak a bit of it onto the internet. On a Friday night even so that hardly anyone will see it. Make of it what you will. 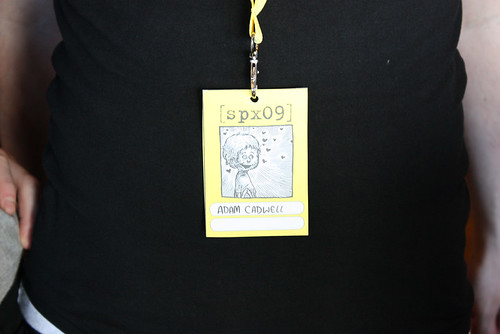 Okay, so I'm a month and a half late with this but I've had to scavenge photographs from all over the place to bring you a Flickr photoset of 140 carefully selected photos (and 3 comics) of our trip to Stockholm for the SSPX comic show. There's an almost photo by photo commentary of our scandalous behaviour as well so click any of the pictures to go and see and read about what we got up to. Here's a favourite photo from each day to tempt you.
FRIDAY! 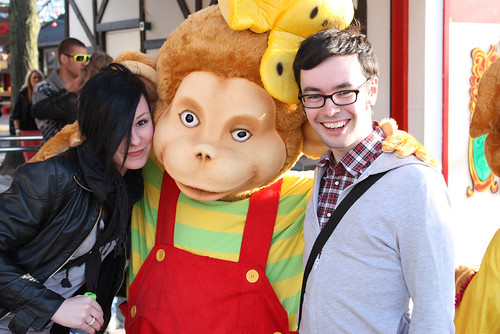 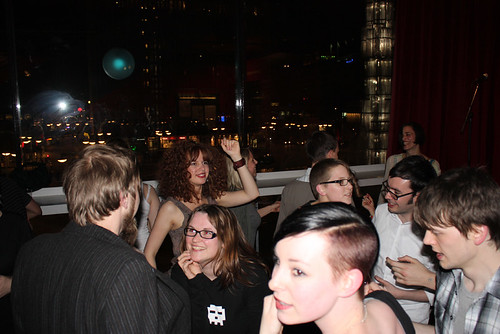 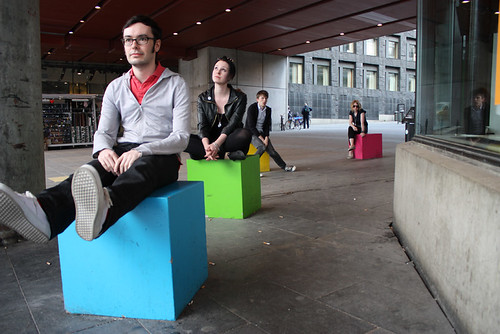 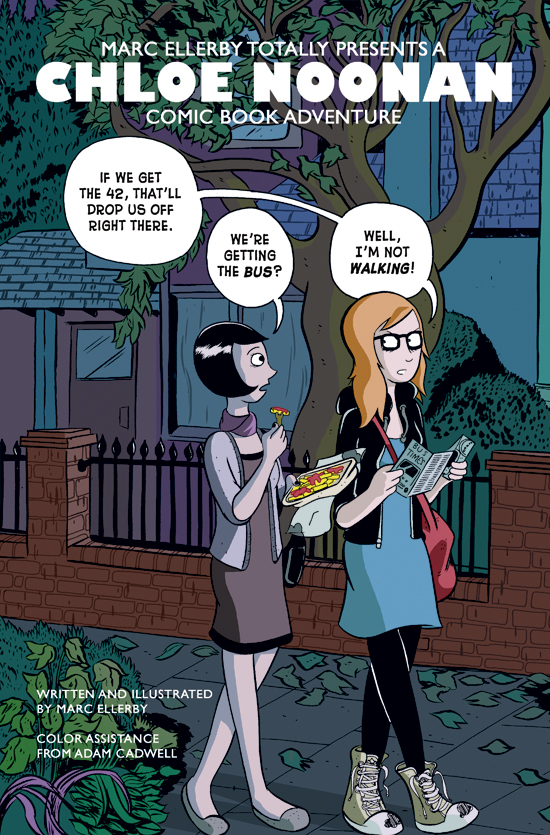 Marc has put a 3 page preview of his full colour Chloe Noonan story up on his blog. It will be appear in the anthology Popgun Vol. 4 later this year sometime, he says, and I cannot wait. As you can see from the title page here I helped with the colours (or the colors, tsk) and I'm really, really pleased with how it came out. If you liked the black and white mini comic, this will blow your mind. 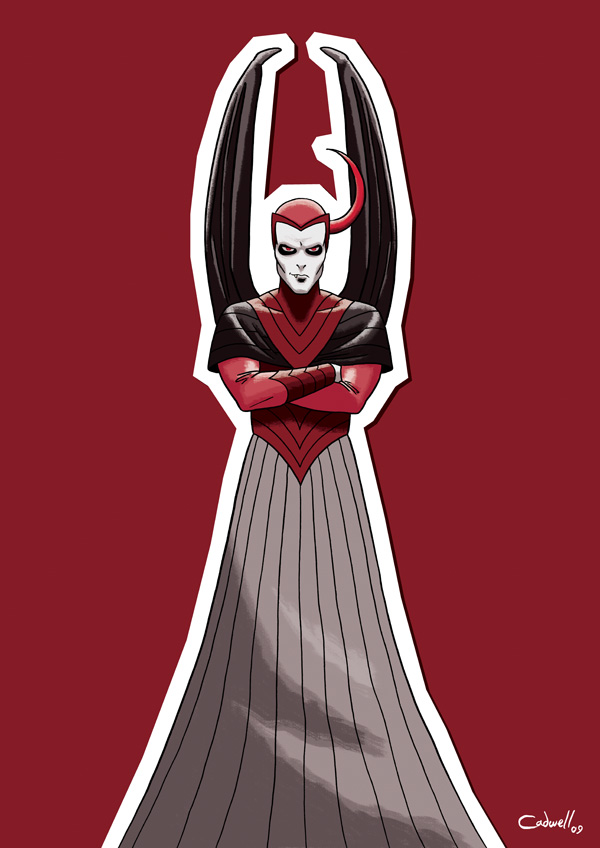 The second in my 'Childhood Villains' series of illustrations, this demonic nightmare fuel is Venger, the "Force of Evil" from the 1980's cartoon, Dungeons & Dragons.

My most prevalent memory of this cartoon was how perpetually depressing it was. Like other shows with the same concept, characters trapped in another world trying to get home, like Quantum Leap, the children would get a glimpse of returning home almost every episode but it would never work out. I think they got home once but had to return because Venger came with them, or something like that. Even as a small kid I got this sense of shattered hope with every episode and how miserable the characters seemed at points, trapped in a harsh, dangerous world, forced to wear stupid outfits and hang out with an old midget (The Dungeon Master). I much preferred He-Man. You knew what was going to happen with He-Man.

Worst of all though was Venger. Often seen riding his black stallion with hooves of fire, Venger was the demonic, vampiric, bat winged embodiment of evil in a big skirt always trying to capture the children's power to locate his lost horn (as I remember it, correct me if I'm wrong). There's something about his design that would terrify me as a kid, partly I think it's the white face and dark eyes, with the snub nose and fangs making him almost snake like. The giant bat wings don't hurt either. But I think it's also the disturbed symmetry of his design that on a more subconscious level lets us know that something is amiss with him. I've tried to emphasize that with my depiction of him, that he's perfectly symmetrical apart from the long, thin, scythe-like horn protruding from the side of his head. Either that or he's just one bad mother. 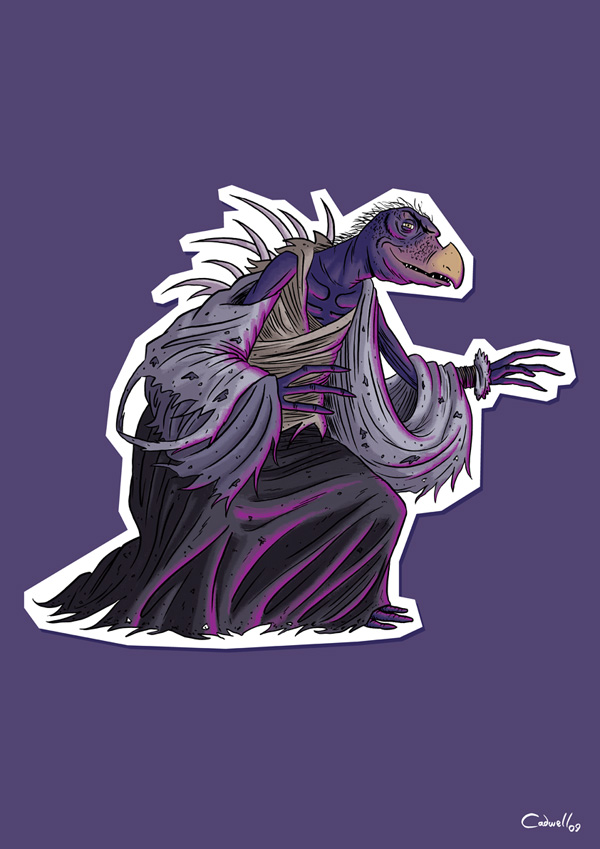 This is the first in a series of illustrations I'm calling 'Childhood Villains'. I'm aiming to draw 6 fictional characters that used to freak me out when I was a kid, hopefully on a weekly basis (ha!). Maybe they freaked you out too and they'll be able to stir up some long forgotten horrific memories, as is the purpose of all art, clearly.

This is Chamberlain from Jim Henson and Frank Oz's 'The Dark Crystal' (1982), conceptual design by Brian Froud, which is the film I used to watch every Saturday morning on good old video tape, normally after my little sister had gotten up even earlier than me and finished watching 'Labyrinth'. Chamberlain is both the most pathetic and the most scrupulous of all the evil Skeksis. When he is banished from the castle by the new Emperor I remember feeling sorry for him, despite the fact he is a hideous, smirking, lizard-bird monster, but when he tries to befriend the heroic Gelflings in his high pitched, whiny voice ("Me friend, make peeeeace!") he is the creepiest bogeyman a six year old could imagine. 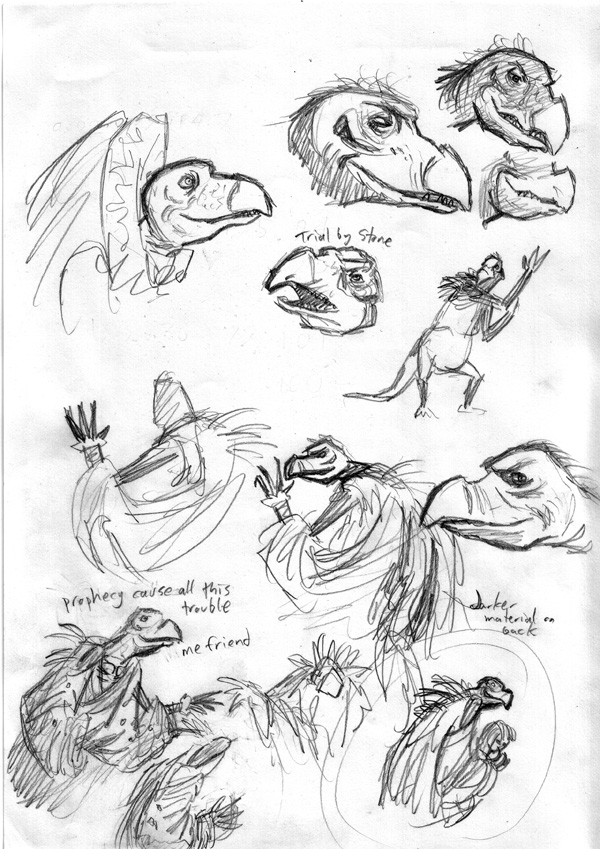 And if you've never heard of 'The Dark Crystal' then shame on you and here's the trailer, which is over 2 minutes long because it is from the 1980's.

Back in April I was walking home one sunny afternoon and saw Jim Medway stood across the street, I went over to say hi and before I could ask him what he was up to, journalist Matt Badham comes dashing out of a nearby cafe to chase me down having seen me pass by. It turned out Jim was meeting Matt to do an interview and Matt wondered if I'd like to sit in on it and share a drink with them in the sunshine. Being a freelancer now I had no pressing reason to get home so I gladly joined them.
We walked around the corner to a bar called Common, of which Jim had recently painted the walls to make it look like an old fashioned pub (photos here). I was careful not to intrude on Jim's interview or steal his limelight in any way, but eventually Matt coaxed me into the interview with some interesting points about Art Education and the British Small Press Scene.
I think it turned out to be a pretty darned good interview, with lots of interesting points about comics, process and art literacy being touched upon. Click below to read it.

'There Aren't That Many Rules Really: An Interview with Jim Medway and Adam Cadwell' 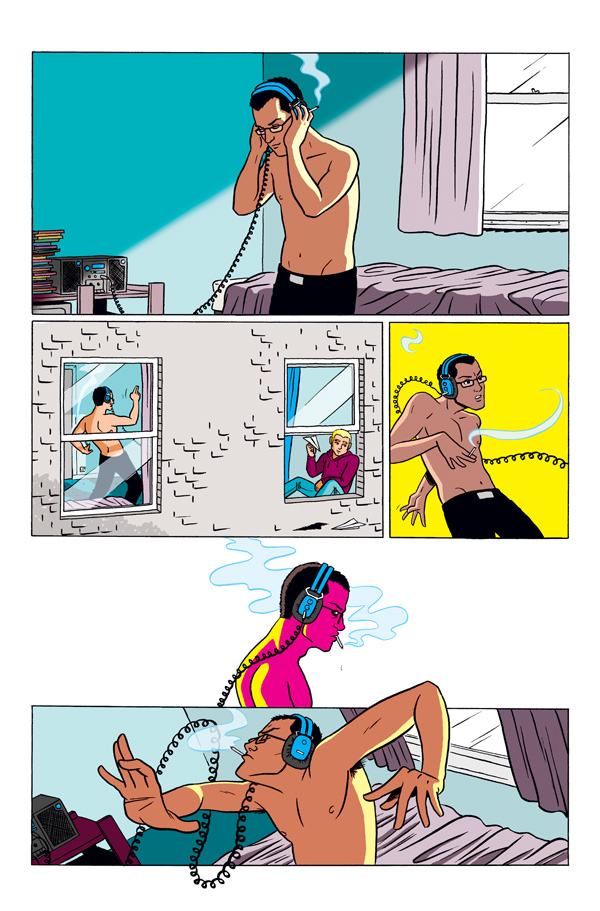 What's this? A full colour comic page? What the Jimminy's going on? Well, this is the unlettered page one of my two page back up story for the current series of Phonogram by that Kieron Gillen and that Jamie McKelvie from Image Comics. I had a right old time trying to get the colours right but now that I've had some distance from it I'm quite happy with them, I've been told they fit the music referenced in the story quite well.

My 'B-side' written by Kieron will be in the 6th issue and has just been solicited for August 26th and will not look like this, as this is just a mock cover:

When there is a final cover, I'll post it here probably with a lettered version of the page and perhaps a Diamond order code. Who knows? It's all tremendously exciting.
Collapse